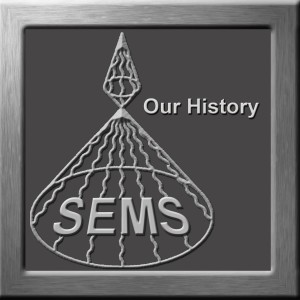 Welcome to the SEMS History page! You will find here various fragments of our history and that of the field of microscopy in general. I hope you will find the postings interesting and educational. If you would like to comment on a posting or contribute your own posting you can send the material to me (jay.jerome@vanderbilt.edu) and I will see that it gets posted. Moreover, I welcome any comments or suggestions you might have for the site.

During the Ruska Award Presentation at the banquet this year (2016), I happened to mention that I am the only SEMS member to have met Ernst Ruska: that meeting occurred during the Fourth European Regional Conference on Electron Microscopy, Rome, Italy, September 1 – 7, 1968.

The Siemens Analytical Instruments Division (SAID) hosted a banquet at the Forum Hotel, which overlooks the Roman Forum and Colosseum. Users of Siemens electron microscopes in North America up to 1968 were invited to that banquet by Cornell W. von Muschwitz, then US director of SAID.

The hosts and more illustrious persons at the banquet were Carla Ruska and Helmut Ruska (Dusseldorf, Germany), Ernst Ruska (Max Planck Gesellschaft, Berlin, Germany), Guston Dupuy (Laboratoire D’Optique Electronique, Toulouse, France), Vernon Cosslett (Cavendish Laboratory, Cambridge, England), and J. B. Le Poole (N.V. Phillips Co., Eindhoven, The Netherlands). The Fourth European conference, to the best of my knowledge was the last major electron microscope meeting that all the above persons were in attendance.

Getting back to Ernst Ruska. I would describe him as a normally soft spoken person with a very clear and precise intellect, and with a gentlemanly manner. He was trained as an Engineer, and of which he was very proud. It is interesting to note that Ernst Ruska was nominated for a Nobel Prize in Physics (because there was no Nobel Prize Award in Engineering) and he turned it down. He did, however, accept the Nobel Prize in Physics in 1986. His co-worker during the late 1920’s and all the 1930’s was B. von Borries, a physicist.

For another reason as to why the 1968 Rome Meeting, considered to be a landmark meeting for electron microscopy, was that it has been described as the divide between “classical electron microscopy” and advanced theory and methodology. Let me clarify that last sentence. Electron microscopy instrumentation up to the late 1950’s and even into the 1960’s was based on theory and practice which was mainly developed prior to the outbreak of WWII.

By the time of the 1968 Rome meeting, the residual gas pressure in a microscope column had been reduced to lower than 10 minus 4 torr and largely purged of carbonaceous debris. Also, the electron beam voltage and lens currents in magnetic lenses had been stabilized to better than 10 minus 4 Amp. Vacuum tubes and other dynamic systems had been largely replaced with solid-state devices. Also, great strides had been made in preparation of specimens for E M. examination: that was especially true in the preparation of biological specimens.

So, when the 1968 Rome meeting convened, microscopists were able to examine their specimens in a clean environment, or a controlled environment, and at a resolution in the vicinity of 2 Angstroms. 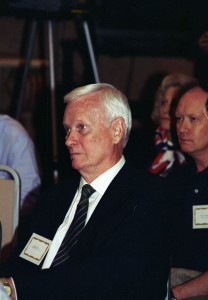 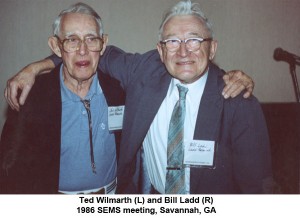 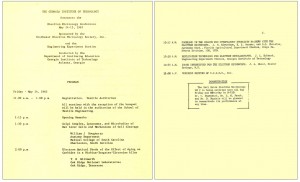